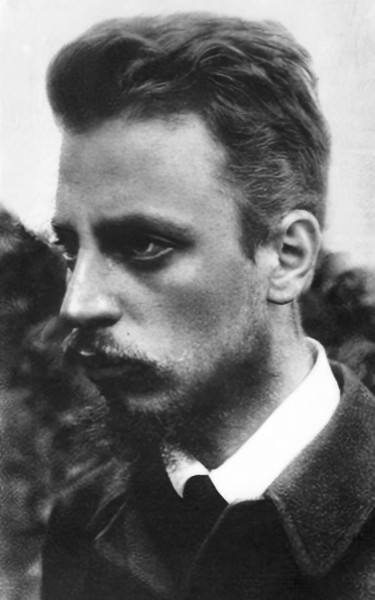 René Karl Wilhelm Johann Josef Maria Rilke (4 December 1875 – 29 December 1926), better known as Rainer Maria Rilke (), was an Austrian poet and novelist. He is "widely recognized as one of the most lyrically intense German-language poets". He wrote both verse and highly lyrical prose. Several critics have described Rilke's work as "mystical". His writings include one novel, several collections of poetry and several volumes of correspondence in which he invokes images that focus on the difficulty of communion with the ineffable in an age of disbelief, solitude and anxiety. These themes position him as a transitional figure between traditional and modernist writers.

Rilke travelled extensively throughout Europe (including Russia, Spain, Germany, France and Italy) and, in his later years, settled in Switzerland – settings that were key to the genesis and inspiration for many of his poems. While Rilke is most known for his contributions to German literature, over 400 poems were originally written in French and dedicated to the canton of Valais in Switzerland. Among English-language readers, his best-known works include the poetry collections ''Duino Elegies'' ('''') and ''Sonnets to Orpheus'' (''''), the semi-autobiographical novel ''The Notebooks of Malte Laurids Brigge'' (''''), and a collection of ten letters that was published after his death under the title ''Letters to a Young Poet'' (''''). In the later 20th century, his work found new audiences through use by New Age theologians and self-help authors and frequent quotations by television programs, books and motion pictures. In the United States, Rilke remains among the more popular, best-selling poets. Provided by Wikipedia
Showing 1 - 1 of 1 for search: 'Rilke, Rainer Maria, 1875-1926', query time: 0.02s
List  Tabulka
Search Tools: Get RSS Feed — Email this Search —
Loading...